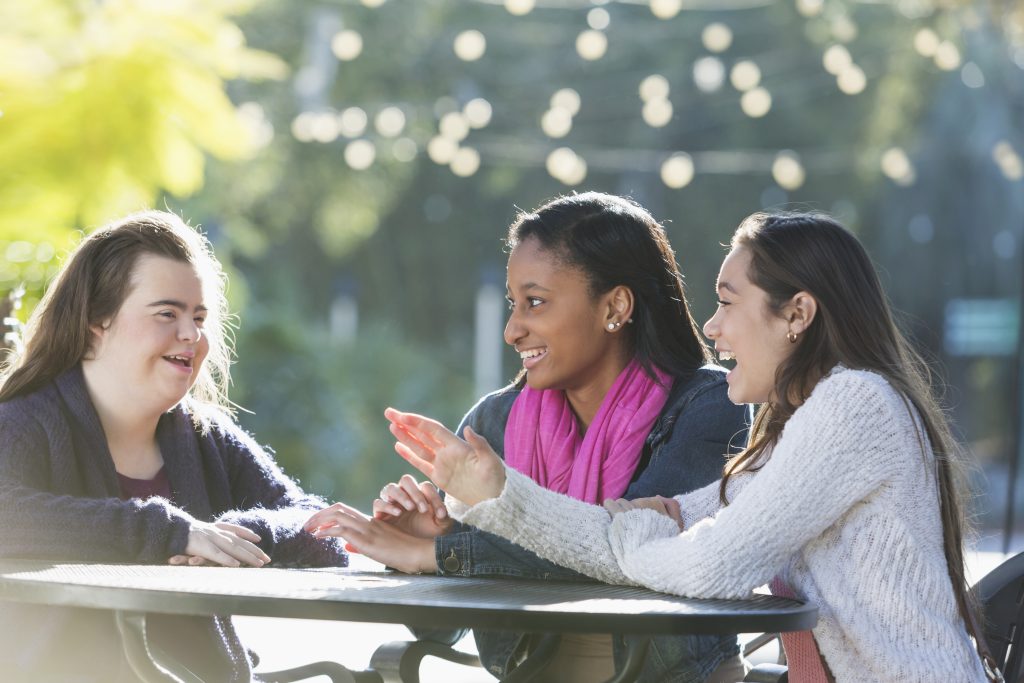 Testimonial: “I’ll always be their mother, but my big hope for both of them in the future is to have more independence.”

Isn’t it funny how you can raise two children just the same and yet they end up like chalk and cheese? Abigail is 15 and has autism, intellectual disability and ADHD. She’s a feisty, headstrong girl and when she has an opinion about something it can feel like it’s her way or the highway! We butt heads sometimes but I think her inner strength will help her out in the future.

I also have a 17-year-old daughter, Sophia, who has Down syndrome and is autistic. She has a sweet, laid back nature. She isn’t as self-conscious as Abigail, and just has fun. She doesn’t mind being seen out in public with her mum either!

As the girls have grown older, there have been big changes in our house. Their personalities have developed and become stronger. This has changed how I parent each of them – how I communicate with them, how I look after their safety and how I encourage their independence.

The biggest wellbeing challenge with both girls as they’ve become teens is probably talking about puberty and body changes. But we’ve found some great strategies along the way through talking with professionals and using information we discovered online.

We got a bit stressed when we knew Sophia’s first period was coming – her occupational therapist said the oestrogen in her blood was rising, which meant her period would start shortly. We chatted to her about how to discuss this with Sophia and how we could prepare her for the changes she was about to experience.

The therapist advised role play – get a doll, get a pad, tampon or panty-liner and put some red food dye on it.  It was upsetting for Sophia initially – she kept saying she didn’t want that to happen to her, but we emphasised this was normal and natural. We included Abigail in these discussions too, and lucky we did, because her period started when she was just eight years old. The visual nature of our approach was a bit confronting, but it worked for my girls, helping them to understand that it’s nothing to be afraid of.

Educational videos have been a great tool to talk to them both about consent. I watched a really good one that relates it to a cup of tea. I used it as a jumping off point to start the conversation with Abigail.

Conversations around consent and safety have come up a lot recently because Abigail’s discovered boys and also has a lot of male friends. I’m SO happy she’s got friends, but it’s also a hard one to navigate. If she wants to go to a boy’s house I ask her to wait until I’ve met the parents first. She thinks it’s because we don’t trust her, but I tell her it’s about being safe. I’m not trying to make a big deal of it,but I also want her to understand why I have concerns. Do any other parents feel this way?

That said, I’m delighted they’ve both got friends from school and from a local youth disability performing arts group. I think it’s really important for them to have this activity outside school because it builds their social skills, helps them meet new people and just lets them have fun.

The group recently had a teenage social night with pizza and a disco which Sophia hadn’t done before. When I picked her up she was absolutely buzzing. She said “MUM, I HAD FUN!”. She was just so excited to have a social night out without us. It was just such a normal thing – pizza and dancing, but it brought me so much joy to see her doing something independently from me.

It can be hard parenting teenagers with disability. My big piece of advice to others is there’s no such thing as a silly question to ask the people around you. Go on Facebook groups, go to those coffee chats and meet-ups, and get advice from others going through the same things.

It’s been such a joy to see them grow and develop.  I’ll always be their mother, but my big hope for both of them in the future is to have more independence.