Returning to school after learning from home during COVID-19 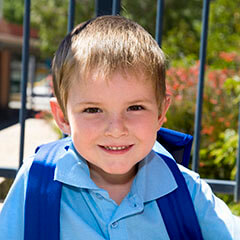 Testimonial: "We are now well into being back at school and while he can’t tell me, I know that Jackson is really happy and enjoying being back." - Parent

Returning to school after learning from home during COVID-19

With three young boys aged seven, five and four, COVID-19 hasn’t been without its challenges but there have also been some positives.

2020 started with such promise as my middle son Jackson started primary school. With his complex medical needs and non-verbal autism it was a big adjustment, but he settled in really well.

Jackson enjoyed his full five days at school and therapies during the week and over the weekend. Then the COVID-19 restrictions came in and everything stopped, which was very difficult for him, and me. It’s very hard for Jackson to entertain himself or enjoy simple play like other children do. Without the full days at school he began to wake at night and was quite unsettled during the day.

Over the school holidays the boys and I enjoyed the slower pace with our daily walks and lots of trampoline. His brothers played with LEGO and built fortresses and always tried to include Jackson but his engagement was limited. This improved as the weeks went by, which was wonderful to see.

We tried to continue Jackson’s therapies and music lessons via Zoom and FaceTime but little worked. This new virtual world just didn’t appeal to him and it wasn’t a world he could learn in.

Jackson has always loved the screen but during the restrictions his screen time was next level. I was getting worried that the gains we had made over the past year with therapy and achieving the wonderful milestone of transitioning to school was all going to be undone.

Then Term 2 began in a way that no one has ever known – with full remote learning. With my husband still (thankfully) working, doing learning from home for our grade 2, preppie and preschooler was up to me.

Jackson’s school was amazing in recreating a virtual morning circle to give him a familiar routine but he hated it to the point of becoming quite distressed and inconsolable. His wonderful teacher even made a personal morning circle just for him with all his favourite TV characters (Nemo, Peppa Pig and Elmo), which he was a little more receptive to but still didn’t love.

In the end, we decided to focus on spending time with his brothers and encouraging him to play. As a result, we found that Jackson began to show more interest and engagement with his brothers of his own accord. This has been amazing and one of the true positives from such a devastating time.

When we finally got the date for the boys to return to school I was excited but also a little sad, as I had enjoyed the slower pace and having my boys home again. Jackson’s school made sure that each student attended a transition day in the week before returning full-time to help with the adjustment. They also prepared a social story for him but it’s hard to know how much he understood from this.

The transition day went well. Jackson walked in happily and went off with his teachers, although he wasn’t too impressed with getting his temperature checked. From all reports he was happy and enjoyed being back.

On his first official day back at school Jackson seemed a little upset when we arrived but I think this was more because he had to wear his shoes than the return to school itself. He was a little overwhelmed as school was busier than the week before but he was happy to go with his teacher and everyone was so happy to see him.

I felt a little teary as it made me realise what a long unique period we had been through but I was happy to see my little boy back to where he needs to be. At school pick-up his teachers said he had a great day and they even managed to catch his front tooth, so the Tooth Fairy visited us that night.

We are now well into being back at school and while he can’t tell me, I know that Jackson is really happy and enjoying being back. His teachers have noticed that he is more settled and is even joining activities he wouldn’t have shown any interest in previously. So maybe the COVID-19 restrictions haven’t been all bad for his progression.